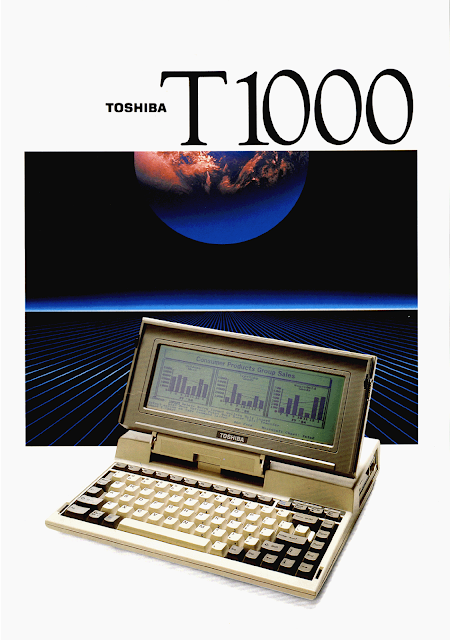 
Welcome to part one of an epic feature on the Toshiba T1000. The amusingly-named computer was the smallest, lightest IBM compatible laptop ever produced when it was released to market in 1987 (pre-dating Terminator 2 by three years), and held the distinction of being the first such laptop to cost less than $1,000. Although the term 'compatible' eventually covered all manner of sins (and incompatibilities), the distinction was much clearer when PC clones first appeared on the market, of which Compaq's Portable was the only attempt to be 100% compatible with IBM's industry standard and that was only achieved by replicating bugs in the PC's architecture. Subsequently, in 1985, Toshiba released the world's first IBM compatible laptop, the T1100. LCD laptops weren't a new thing by any means - GRiD had an LCD laptop in 1982 - but IBM compatible ones were otherwise non-existent. The miniaturisation and integration techniques employed to great effectiveness during the T1100 project were refined even further, resulting in a computer in 1987 that was smaller and lighter than anyone considered possible: the T1000.


The T1000 was a revelation to journalists from the IT press and beyond when it was launched in 1987, mostly because they were the people who saw the greatest benefit in owning one: a 6.4lb IBM-compatible laptop with good battery life and an LCD display that could display 25 lines of text? (this is how laptops were measured back then). YES PURLEASSSE!

Toshiba's entry into the laptop market was bold and brilliant and had taken place in 1985, two years previously. The industry had been scrambling to perfect the holy grail of a truly portable PC (called 'transportables' or 'lap computers' previously) ever since the Osborne 1 pioneered the concept in 1981. While there had been a number of pretenders before 1985, such as the groundbreaking Epson HX-20, none had yet managed to pull together the full list of desirables convincingly:

The T1000's predecessor, the T1100, was the first laptop to achieve all of the above, and it's official: the IEEE awarded it a Milestone in Electrical Engineering and Computing in 2013 for its significance. With its improved LCD screen and high integration using gate arrays and surface mount technology, the T1100 was the first step in Toshiba becoming the leader in the professional laptop market. They followed up this landmark with the T3100 - the first ever 286 portable - winning a technical excellence award in January of 1987.

By the time the T1000 hit the market, it represented the zenith (no pun intended) of Toshiba's engineering expertise, taking the best features of its predecessor and cutting... well, any component that had weight. When I first saw this laptop I couldn't actually believe it was an IBM compatible because, for 1987, it just didn't seem to contain enough 'stuff'. Many portable computers in the first half of the '80s were intended as 'companion' machines for your main desk computer. Although the T1000 could be used as a self-contained PC in its own right, it did have some shortcomings. It was its price and lightness of weigh that caused the impact.


So let's start out our profile of this computer by looking at the official specs brochure, which was published in May 1987. The document can be downloaded here. 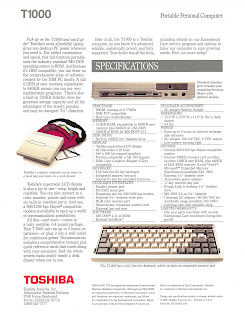 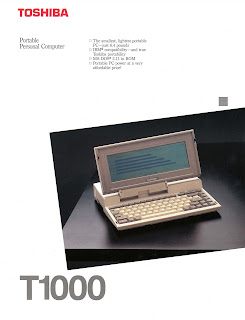 The key feature that set this laptop apart from others was having a ROM-based operating system. Traditionally a computer lacking a hard drive would need two floppy drives: one for the OS and one for the applications. By recognising that the OS disk was largely redundant - as it stayed in one of those drives pretty much permanently - Toshiba put the OS on a mask ROM chip. This resulted in only one floppy drive being needed without it being a pain in the arse to use.

If one wanted, the T1000 could act as a main computer quite easily. Although the built-in display is mono, there is both a CGA port and composite for connecting an external monitor (or TV if you're in a hotel, for example) and it was possible to attach a standard 5.25" drive as well, and a keypad. This effectively comprised a modular desktop PC.

The designers went one further with the 768K RAM card. As this was battery-backed, it could be used as internal flash storage, which eliminated the need to swap in a floppy for saving data. It was also significantly quicker and used less power. As it was an option, the chances of finding one in the wild are slim to none these days.

One of the first adverts for the T1000 appeared in PC Magazine at the end of September 1987: 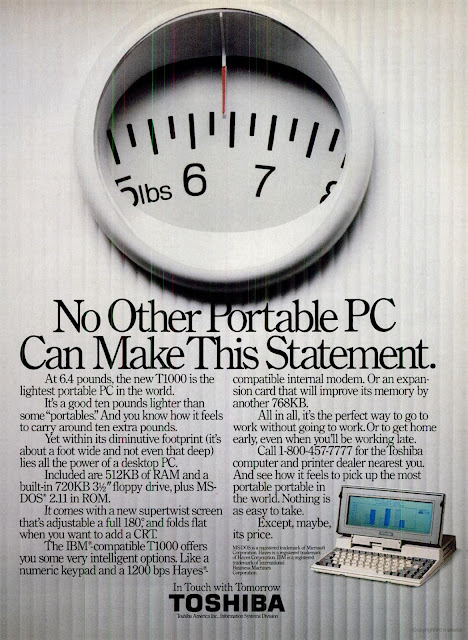 This was followed a month later by a brief feature:


What's this? Direct congressional action you say? That, my friends, is a whole other article right there. The short version is that Toshiba's parent company were naughty and sold tech to the Russians (the cold war was still very much on, remember). This, combined with the mid-80s chip-dumping controversy (like I said, another article) resulted in imports of Japanese 16-bit computers to the US receiving a 100% surcharge. It took a while for Toshiba to transition their manufacturing to the US, and the T1000 was one of the first to come out of the new facility. Curiously, before the tariffs could kick in, existing stocks of Toshiba laptops flew off the dealer's shelves at heavily discounted prices. This must have skewed the market in some way, and I doubt it was to Toshiba's disadvantage. 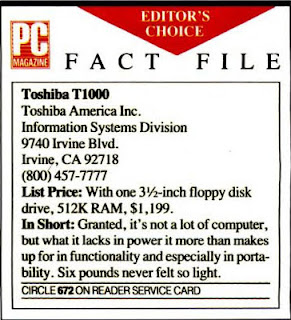 In late October, PC Magazine ran a hands-on feature of the machine and they were positively gushing about it, to say the least. The T1000 was described as 'brilliant' and that the light weight made up for the screen's shortcomings as there was no other laptop on the market even remotely like it. The Tandy TRS-80 Model 100 was cited, but that's not IBM compatible and is decidedly short on features by comparison. By prioritising compatibility and eschewing performance and battery-draining features, the T1000 was a master stroke. By the end of 1987, it could be purchased for less than $900 with discounts and was labelled "the closest thing yet to the perfect laptop" by Philip Rose of PC Magazine in their January 1988 Best of 1987 feature.

Considering its competitors were sporting 386 processors, hard drives and gas plasma displays, the T1000 should really have been a complete flop. But by focusing on being really good at one thing (running office productivity software such as Lotus 1-2-3 on the go) it was almost a non-brainer for business customers. It went from strength to strength, winning a PC Magazine Editor's Choice award in March 1988, in a group test of 12 laptops from the likes of Sharp, GRID, Zenith and Compaq. This is how revolutionary the T1000 was.

1988: The Competition Heats Up


In December of 1988, Arthur Leyenberger, of Atari-themed ANALOG Magazine, chimes in with his own comparison to the TRS-80 (Model 102 this time) as the long-standing portable of choice, stating that the T1000 had taken its crown thanks to a better display and true IBM compatibility. The comparisons continued: it seems the Tandys were the de facto portables to be found on jumbo jets full of journalists thanks to their compact form. The Chicago Tribune extols the T1000's virtues in March 1989, however, Only the NEC Ultralite was lighter at the time, but this had no floppy drive, was way more expensive, and used obscure bubble memory cartridges for storage. Below is a comparison of specs from InfoWorld in June 1989: 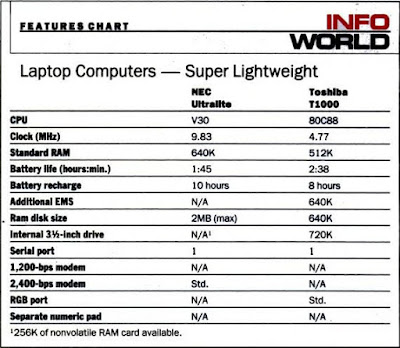 At nearly $3,000 retail price, the NEC is about 3 times the price of the T1000, so it's really only intended for those who need the additional performance (the V30 is a 286-equivalent) and would be much harder to justify for a mere flying hack.

By the time 1989 came around, the T1000 had company aplenty in the lightweight DOS laptops category it pioneered. All Toshiba needed to do though was drop the list price below $1,000 and it retained the title of 'no brainer'. You basically had to think of a reason why the T1000 wasn't the best choice of lightweight laptops. Following NEC's effort (and its significant supply problems), Zenith tried to do one better with their MinisPort and certainly produced a very small and light laptop. Criticism of its display, the inclusion of a non-standard 2" floppy drive, and an unattractive price led to it being all but dismissed.

The thing about Toshiba is that they had already done all the technological hard work in developing the T1100 - both the T1000 and the T1200 benefitted from its technological advances and compatibility, allowing Toshiba to take a stranglehold on the laptop market while everyone else tried to catch up, despite multiple adversities working against them. 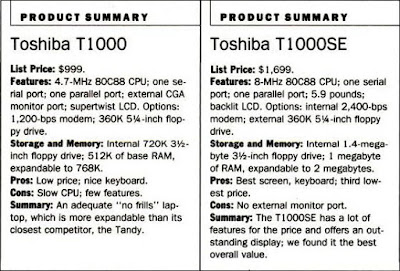 Cut to March 1990 and things actually hadn't moved on much further in the lightweight laptop arena, with the usual faces showing up again. Despite this, Toshiba did anything but be complacent. InfoWorld ran a group test of 8 notebooks, among which was the now 'veteran' T1000 and its successor, the T1000SE. This new model took all that was great about the T1000 and addressed its limited shortcomings with a larger, backlit screen, more RAM and slimmer profile. This kept Toshiba at the top of the recommendations chart, ahead of Compaq, NEC, and Tandy. Again. After this point, the T1000 slipped off the radar and became history. It is not a well-known machine today and, like many laptops of the mid-to-late '80s, surviving examples are becoming increasingly rare.


- Here's an article Benj Edwards wrote for PC World showing his own efforts at restoring his father's T1000
- The Register has a story of a reader who had a fleet of T1000s still in working service.
- The Free Geek Vancouver blog page has a nice detailed article on a T1000 teardown.
- If you're so inclined (i.e. insane) you can convert your T1000 (or any) keyboard for USB use.
- Sergey Svishchev has compiled a ROM to emulate the T1000 using MAME.
- The T1000 even made an appearance on TV in the 1991 British series Dark Season, starring a young Kate Winslet and written by Russell T Davies, the man who resurrected Dr Who in 2005.
- LGR did an Oddware video on the Avon Beauty Vision computer that he found on eBay, which is based on the T1000.