Welcome to part three of an epic feature on the Toshiba T1000.

Toshiba published a datasheet on the T1000. I'm replicating some of it here to make it more searchable, but it does include quite a bit of info I deliberately left out. Please refer to the datasheet itself if you do want to know about shortcut keys, environmental specifications, options and accessories, and technical info like memory map, interrupts and port assignments.


A complete XT clone on one board. Pretty impressive, huh? 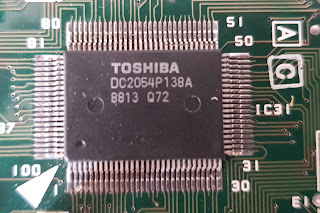 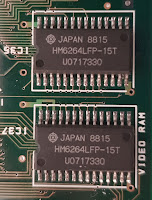 DC2054P138A (IC31) is Toshiba's gate array for controlling the dot matrix display and external CRT. There is no published datasheet, but technical details for all the proprietary ICs may be found in the T1000 maintenance manual. 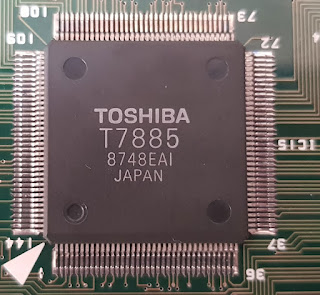 You can see from the main photo that the large chip T7885 (IC15) is the super integration (SI) gate array, based on its size and position. It's the key to the T1000's compact form and integrates the functionality of the following discrete ICs:

It also interfaces with the speaker, keyboard (80C50), floppy drive and external bus. 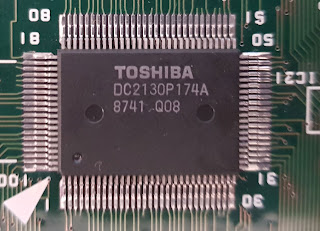 DC2130P174A (IC21) is the I/O controller gate array and includes the following functions:

IC35 is a microcontroller based on the 80C50 and is utilised as the keyboard controller. 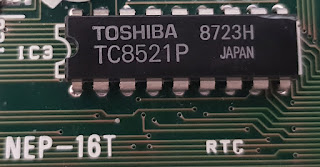 Finally, TC8521P (IC3) is the RTC & CMOS RAM. Although it isn't Y2K compliant, Toshiba have implemented it in a clever way as to make the actual computer compliant. The RAM holds the system configuration 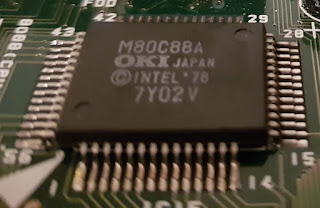 OKI's version of Intel's 8088 was originally designed by Harris Semiconductor and is basically an Intel 8088 but fabricated using CMOS manufacturing process. This reduces power consumption compared with the original part while maintaining full software compatibility. It is 16-bit internally, with an 8-bit data bus and can address 1MB of memory. The RAM chips are Toshiba model TC514256PL-12 (IC17-IC20), also CMOS parts. With a 12ns access time, they can operate up to 8MHz. Each chip obviously provides 128KB of memory

The dot matrix panel has a resolution of 640 x 200. The driver board holds eight T7778A (labelled XD1-XD8) column drivers, each driving 80 columns, and four T6961B row drivers (YD1-YD4). There are no datasheets available online. Interestingly the T7778A is the same one as found in the Texas Instruments TI-81 programmable calculator from 1990.

At one point, Axonix provided a service to retrofit a backlight to the T1000. This was not a trivial upgrade as it took 5 days, added weight, increased power consumption and worsened the readability of the display without the backlight. It's possible there's a way to do it using more modern technology but I think too much could go wrong for it to be worthwhile. Get yourself a T1000SE if you want a backlit screen.

The T1000 comes equipped with a 3.5" floppy drive. This is a double-density, double-sided, double-track drive supporting 720KB disks. These are the specs according to the maintenance manual.


There are two known versions of the BIOS (I'll dump mine at some point in the future for reference):


As mentioned, the T1000 avoided inclusion of an additional floppy drive with Toshiba DOS 2.11 / R2A on mask ROM (If a mask ROM is like a CD-ROM, an EPROM is like a CD-RW). The ROM in my T1000 was created on March 17, 1987 according to the readout from CHKDSK.EXE. It has the volume label IC-DISK ROM and includes the following DOS-related files with the same date stamp as the ROM:


The following Toshiba programs are also included, with date stamp June 11, 1987. Based on this, it can be assumed that a T1000 with either BIOS listed above has the same DOS ROM:

Here is a printout of AUTOEXEC.BAT:


Config.sys has one line:


The ROM effectively simulates a floppy disk in the way that it is organised. John Elliott's T1000 page goes into all the detail you could possibly need to know about the ROM itself so there's no point me replicating it here.

I've seen it alleged that Toshiba offered ROM upgrades for sale to provide a more recent version of DOS than 2.11 for the T1000 but it seems these were never available.  Given that DOS 2.x was released for the IBM PC XT originally, it's pretty much the appropriate version for this computer and there would be limited practical advantages to upgrading it if you're using period-correct software. DOS 3.x mainly brought with it enhancements to hard disk partitioning and high density floppy disk support anyway, and these are redundant with the way the T1000 is configured.

You can boot DOS 5.0 via floppy disk, but the ROM will not be recognised. It is also possible to burn yourself a ROM with a different operating system and / or additional software.

John Elliott actually went to the trouble of writing a program that converts a floppy disk image into a format that can be either burned onto an EPROM or run in an emulator. One issue with this method is that you have to use the version of DOS that came with the T1000. This is because the ROM image has no partition table and versions of DOS after 2.x don't recognise this configuration. It's certainly the simplest way though, and the files can be downloaded using the link above.

A dude called Kent Nickerson provided a guide on comp.sys.laptops (a newsgroup, now archived on Google) having successfully upgraded the stock 256KB EPROM with a 512KB part. This allows the user to include an updated operating system and additional software and he even provided a service for people who wanted an upgrade but didn't want to do it themselves (it's... complicated). Apparently some people reported problems with their replacement ROMs so he gave up, but it worked at least once for him. In case the guide becomes unavailable, I have created a PDF version that can be downloaded.

Method 3: Use the Hard RAM

If you have the RAM card installed, there are two ways DOS 5.0 or later can be used. The original guide is archived here:

Essentially you can either reconfigure the RAM card as drive C, or boot from floppy and use the RAM as static storage.

That's all I can be bothered to write at the moment. As and when I decide to add more, I will.

18 Nov 2018: added information on floppy drive.
12 Feb 2020: formatting changes so it's less broken. PSU info. Replicated some info from the Toshiba's 'datasheet' of the T1000.
6 Aug 2021: added some more useful information from the service manual. Although it would be pointless to reproduce all of it, there are some useful snippets, such as shortcut keys for external display, etc.
Posted by Brassic Gamer at 10:55