Home Page
Part One of this article profiles the hardware itself and its history.
Part Two features cleaning it up and using it for gaming.

So, now that we know the physical ins and outs of the AcerMate 386/20N, let's put a system together around it. As I mentioned, this system very closely resembles the first PC I had, despite the latter having a 25MHz AMD CPU. The joy of retro computing is the ability to put together a system that is a significant upgrade over the original thanks to (most) old hardware being more affordable now than it was back then (or by having more money now than back then). So let's look at the original specifications of my first PC and compare them with this new system:


As you can see, there is little difference between the two systems. My original system was eventually upgraded with an optical drive at some point but, as you can see, that's not an option in the AcerMate's case so I'm relegated to using a parallel model if I choose to go that way but, to be fair, 99% of the games I played on my first PC were floppy-based. The most significant differences are storage and audio. It was only when I got a 486 that CD-based games really came to the fore.

Setting this machine up as a usable gaming system was never my intention. It was only by listing all the games I played on my first PC (in the first entry on this system) that I got that retro buzz and decided to actually use it. Plus my kids (and my younger brother!) have shown great interest in the games of the 1992 era. Let's take a look at each of the components listed above.

Although not in horrid condition, it took a bit of work to get this system looking cosmetically better. As there is a little case discolouration I would like to Retr0bright it at some point but that can wait. Instead I focused on doing a solid cosmetic clean of the case and the internals. I completely dismantled the case by removing all the components, cables and motherboard. I put the case itself into the dishwasher with a detergent tablet on a quick wash (so it doesn't include the drying cycle and doesn't get too hot. This actually made little or no difference to the state of the case so I resorted to scrubbing it with a scouring pad in some warm soapy water in the sink. This did a great job.

You can see from previous photos (especially close-up ones) that the motherboard was very dusty. I've got a thing about dusty or grubby tech so I removed all the chips, submerged it in the soapy water, and used a soft paintbrush to go over the board and between the components. After giving it a good rinse and leaving it to dry, it looked good as new in the morning. You may have noticed that this board uses crappy plastic clips to retain the SIMMs. Fortunately, these aren't as crispy as I have seen on other boards so hopefully they won't crumble. There's always the glue gun... 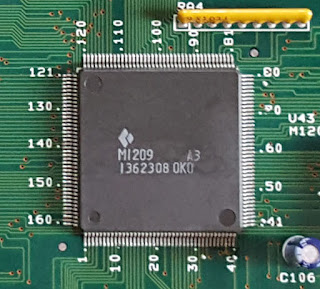 One thing I didn't mention at all in part one is the chipset. As you can see from the picture above, the layout of this board is incredibly simple. Aside from the CPU and the GPU, there are very few other chips on the board. The chip just to the left of the acuMOS graphics chip is Acer model M5105, which is the I/O controller, and can be found on a number of ISA drive / comms controllers of the time. We then have the big chip in the middle. This obviously integrates all of the remaining core functions such as RAM controller, bus arbiter and such. But wait, creating an entire chipset is a pretty big undertaking for a PC manufacturer, isn't it? You would think so until you notice that Acer had a subsidiary called Acer Labs Inc. or ALi. Yep, that's the same ALi that created the legendary ALADDiN V chipset for Super Socket 7 motherboards and, before that, the M1489 chipset that was popular on 486 boards. the M1209 was their first ever integrated chipset. Cool. Evidently their need to create a highly integrated controller for this small-footprint, low-cost PC expanded their remit.

While checking out the newly-clean board, I noticed a few other features I'd missed the first time around: 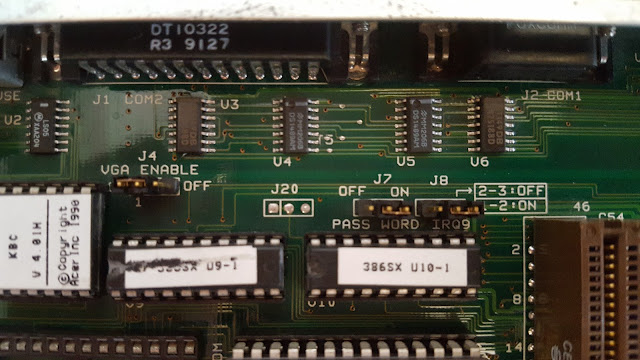 J20 is unlabelled, so its function remains unknown. J4 obviously allows you to disable the internal VGA in the event of installing a separate (presumably better) display adaptor. J7 is obviously a boring security feature, but J8 is much more curious. Finding information on IRQ9 was tricky, but I found an archived page that goes into some detail. It's seemingly a compatibility feature, a hangover from the EGA days, so probably never needed in this setting.

I noticed that the solitary fan in this system was quite loud. When lubrication didn't make any difference I decided just to unplug it a) because of the noise and b) because all it seemed to be doing was blowing dust and dirt onto the RAM. Most 386 systems didn't have fans of any kind except, perhaps for the PSU. In this particular case I was wrong. After coming back to the system at a later point, I started experiencing all sorts of instability problems, mostly related to the RAM and it not being recognised. It seems the fan isn't optional after all. Once I reinstalled it, the system settled down.

The PSU was also pretty filthy inside, so I got the baby wipes out and used a screwdriver to drag it between the components and clean the PCB as I didn't much fancy submerging it:

Yeah, so no one's going to see the inside of the PSU but, given it's the only component of the system that gets warm, I'd like to extend its life as much as possible by removing the layer of brown insulation.

As you can see, this processor runs 5MHz slower than my first system and, as it's an SX, is cacheless so there are extremely limited options for performance gains. I remember 25MHz being barely enough for some games so I would like to try and squeeze some better performance out of this system for absolute comfort. Wolfenstein 3D runs fine, and that's usually a good test of a system from this era. As soon as you get into texture-mapped graphics though, things crawl. I'm thinking of Microprose's F1GP and Blake Stone in particular, and I even remember Indianapolis 500 being a bit jerky because of all those polygons.

The simplest option is also the least likely to happen. Cyrix (and probably others) made 386-to-486 upgrades that snapped onto the top of a 386SX. Apparently they use the co-pro pin to disable the 386 and let the new CPU take over. This doesn't work on the 16MHz model, as it lacks this pin. These upgrades are, however, super super rare and I've never seen one in the wild. Unless I pay an exorbitant amount or get extremely lucky, it ain't happening.

The more likely option (also more tricky and makes less difference) is via a crystal upgrade. I noted in part one that the motherboard has factory-set options (in lieu of jumpers) to set the speed at 16MHz or 20MHz depending on which crystal and which CPU are installed. Obviously my board has a 40MHz crystal so I could, theoretically, swap this for a 50MHz crystal, effectively overclocking. I don't have one of these right now but perhaps I could salvage one at some point.

Initially, in 1993, I had no sound card at all, so it was PC speaker all the way. I got into an argument with someone on YouTube a while back who was trying to argue that the Amiga was technically superior in every way to the PC as a gaming machine. There really wasn't any argument - he's right. But when it comes to nostalgia, superiority has nothing to do with it. Yes, the PC speaker has a very limited skill set, but it's what I grew up with. Grabbing a power up on Duke Nukem makes the best noise.

I then got the Adlib clone so although that earned me synthesised music and SFX, there was no digitised sound. I used to love going round my mate's house because he had a Sound Blaster on his 486 PS/2 and we used to insult Dr. Sbaitso and play Rebel Assault endlessly - that game evokes many memories for me, mainly because of the FMV and the fact it was the first game exclusively on CD-ROM. I didn't get a Sound Blaster until I built my 486 system in 1995 and things had moved on by that time, so it will be good to go back to all the first games I played and hear them with digitised sound effects.

I'd managed to pick up an SB16 model CT1740 from eBay for a very good price indeed, and this is the perfect system for it. 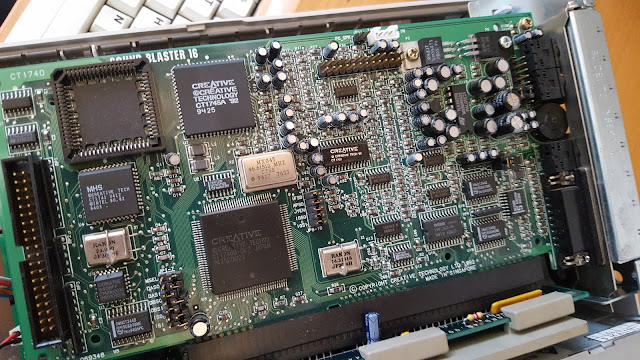 It uses the YMF262 chip for FM sounds, which is preferable to the later models that used Creative's own version of synthesis. It also has the manual volume adjustment on the back, which is an essential oldskool feature as far as I'm concerned, and adds to the authenticity of this system. I had a minor issue accommodating this card in the system, as it seems to have low tolerance for cards with many ports on the back. I had to remove one of the screw-posts (maybe they're not called that) from the game port to get it to fit, but it worked. 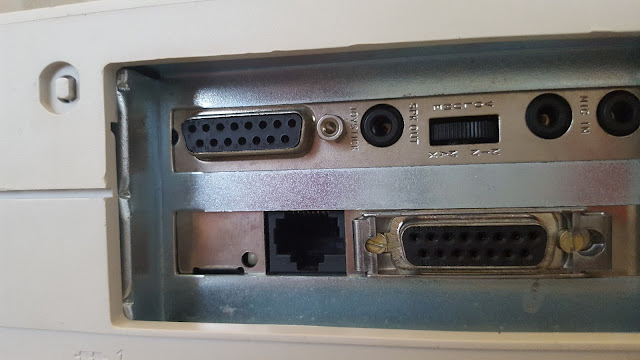 One thing I also nearly did was add a Roland Sound Canvas for MIDI audio. Now, much as I craved General MIDI in my games back then when I couldn't have it, including it now would create a very different feel to the system. That's why I'll stick with FM, because I truly love some of the FM music from games back then, where I don't have the same feelings for the MIDI renditions. I now don't know which system I would include the SC-50 in, as I have an AWE64 for that, technically. Meh...

Output will be handled by a pair of Altec Lansing speakers that I recently picked up for £10 from a local seller. I never had powered speakers back then, just a crappy little passive pair, so it'll be good to hear the FM sound a lot 'bigger'. I even managed to get the matching sub-woofer at a later point.

Hilariously, the Acer came with its original Conner CP3000 42MB hard drive. That's a little too much nostalgia for me. I've got a decent stock of hard drives of various capacity so I chucked something random in there, preferring quicker access times and more storage space than the authentic 1993 experience. Before installing it, I put the drive in a different PC and copied over all the games I wanted, so I could avoid transferring files as much as possible; my network sucks and there was no way I was going to transfer via floppy disk. INTERSVR an alternative, as I have null modem cables. Once that was done, It was ready to go - all I needed to do was install the operating system and the drivers! 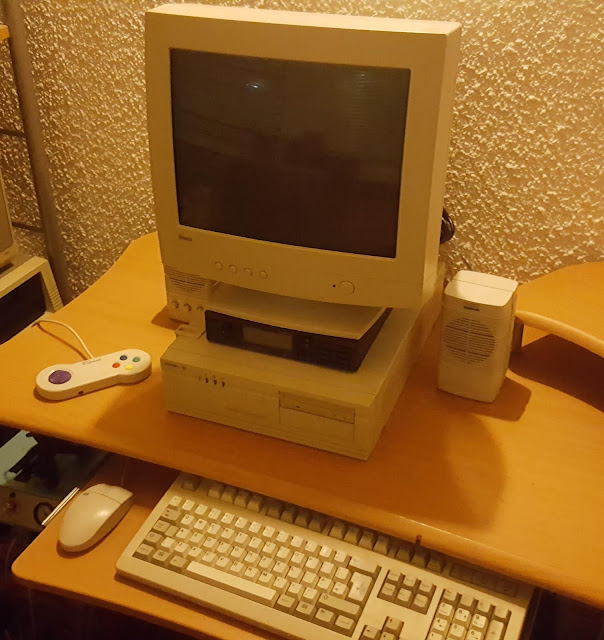 This is the only current photo I have of the completed system, not powered on unfortunately. I think a video would be the best format for profiling this system in action. Obviously ignore the Sound Canvas under the monitor. The mouse is a classic, and so is the keyboard with nice clicky ALPS switches.
Edit (March 2021): as I now have an EPROM programmer I have dumped the BIOS for this machine. It is available here in this zip file. (Hopefully it works!)
Home Page
Posted by Brassic Gamer at 16:07