The article, written by CPC's editor Ben Hardwidge, is actually an interview with Creative Labs founder Sim Wong Hoo. I suppose you could call it a story in the sense that Jack and the Beanstalk is a story. A tall one. One that should be taken with a massive pinch of salt. Or located firmly in the fiction aisle.

I don't think anyone expects an article like that to cite sources but it's preferable if you'd like to avoid plagiarising, which the article isn't far off doing. The preamble to the interview is startlingly similar to excerpts from the 1998 book Asia's Computer Challenge. Aside from being written some ten years after the events it summarises (poorly), this book claims the "Sound Blaster hit the market just as Intel's 386 card [was] arriving..."[1] This is no way to establish technical credentials. It gets better worse. The question that seems to have got everyone pretty animated (me included) from the original version, since corrected(!), was this:

Oops. MIDI synthesis is not a thing, but I'm not even going to get into that. I found Sim's answer to be far more interesting and far more problematic:

"The first Sound Blaster did have a different music synthesis system – that was already in our Cubic CT PC in 1986. In fact, the first generation of Sound Blaster supported both the Yamaha OPL2 FM synthesiser and our own 12-voice synthesiser, so by default, it automatically supported a wider range of software from the two standards, giving users the best of both worlds."

My proof-reading wife, a lay person, chuckled at this almost as much as I did. This is because Creative's different music synthesis system was shit[2][3][4] and Sim should not be suggesting otherwise. He also quite clearly bristles at the use of AdLib and first in the same sentence like it never happened or was inconsequential. This really couldn't be further from the truth.


The Sound Blaster's predecessor, the Creative Music System (C/MS, later rebranded Game Blaster) was released in 1988[4][5][6][7][8][9][10] (despite what other sources might say[2][11][12][13][14][15][16]). At this time there were a number of PC sound products available, the most notable being the AdLib, using Yamaha's successful FM synthesis, and Roland's MT-32 using premium LA synthesis. The latter actually isn't a sound card, but deserves a mention because it was as well supported in games as the AdLib. Each of these products were originally intended for the PC-toting musician but generally poor sales initially suggest consumer apathy.

Creative's first two sound cards used square wave synthesis exclusively. This attempts a trade-off between the qualities of a sine wave and a sawtooth wave, but ultimately achieves neither[17]. While they produce fair instrumental sounds[18], square waves are pretty crap at replicating percussion, thereby limiting their versatility. FM synthesis, on the other hand, is vastly superior in comparison[19]. The C/MS did output stereo, however, and this appears to have been how Creative tried to stand out from the competition. The limitations of the C/MS did not appeal to developers, not helped by the fact that the technical documentation did it no favours[20]. A much more interesting question to Mr Sim would have been why Creative chose Philips' product in the first place.

So the AdLib was technically superior, attracted more developers, and was released over a year before the industry heard of the C/MS or Game Blaster. Additionally, this OPL2 synthesiser Sim is talking about that Creative included in the Sound Blaster essentially WAS the AdLib. Observe:


Creative With The Truth?


To be fair to Sim he's actually an interesting guy and something of a philosopher, based on other interviews[21][22], but the true Sound Blaster Story is that Sim is a bit of a lunatic. Wait, that's not always a bad thing, right? Many successful technological dynasties have been built on the drive and passion of lunatics (Apple, Microsoft, Oracle, Amazon, Tesla...) and they wouldn't exist otherwise. I'm just saying it also means their portrayal of historical events shouldn't be taken as Gospel. He still cannot, to this day, give Ad Lib Inc. even a crumb of credit for their contribution to the development of audio hardware on the PC, efforts that were indisputably critical to Creative's eventual success.

If I haven't convinced you of this pattern yet, there are examples where Sim seems unsure about the history of his own product and, at worst, he intentionally misleads. Later in the CPC interview he claims:

"At Comdex, people lined up in 20-person queues in front of three cashiers in our tiny 300 square foot booth – we sold one Sound Blaster every four minutes."

Now let us expand this nugget by looking at the same claim from Sim's 2003 book, Chaotic Thoughts From The Old Millennium[23]:

"...over the five days of the trade show, sold 600 units of the sound card – one order every four minutes."

There is the claim of 3 cards per minute claimed elsewhere,[24] which means either not that many were sold, or the days was shorter. Either way, it took more than a few sales at Comdex in '89 to launch the Sound Blaster. Sim was giving them away at some point before December 1990 (see right), much like AdLib did with their early cards[25], so we can safely assume they weren't killing it just yet. Ultimately they did, of course, and they well and truly buried Ad Lib's asses in the desert. even if it did involve some seriously dirty tricks like manipulating the QA process so the newest AdLib was massively delayed[25].

History Is Written By The Victors 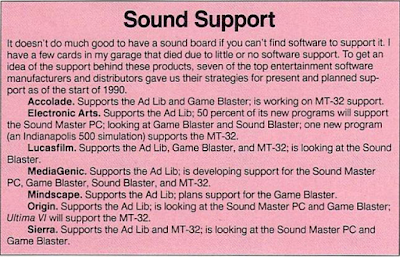 I don't like that Sim has attempted to maintain a narrative that Creative built the sound card market from nothing. It's complete bollocks and Sim's claims should be regarded as anecdotal at best. The Sound Blaster succeeded for two reasons: AdLib compatibility and a built-in game port[25], a particular technical efficiency that most people today wouldn't appreciate. It certainly did not sell for its best of both worlds synthesis for the reasons mentioned previously. No one asked for Game Blaster compatibility and no other device supported it. It was 'useful' in the Sound Blaster purely for backwards compatibility. Sound Blaster also didn't succeed because it offered digitised sound. Not initially, anyway, as this was still a gimmick in PC land. It also wasn't because it supported a wider range of software because only one game that we know of (Airball[26]) supported C/MS and not AdLib.

The bottom line is that the first two standards in PC game audio were AdLib and Roland. PC speaker aside, almost every PC game supported these two products by the time the Sound Blaster came along. As a direct result every subsequent product had to support at least one of them or be doomed to obscurity.

Just because Creative won out, it doesn't give Sim the right to misrepresent the events that built up to it. It took me three days to write and research this article so that I could reliably prove what actually happened. If we want to hold a historical record of creativity in our industry then it's what we all should be doing.
And it's not that hard.
Home Page