Over at Vogons a little while back, someone asked if anyone had benchmarked different methods of reading and writing floppy disks to see which was best. I performed some tests and found out the following headlines:

- LS-120 drives are awesomely fast at reading floppy disks but terrible when it comes to writing.
- USB drives are around 20% slower at writing than native floppy drives, and only marginally better at reading.
- Mitsumi USB drives are crap.
- In most cases there is no difference between operations performed on a PII running Windows 98 with USB 1.2 and a Celeron D system running Win2K3 Server with USB 2.0. I did observe a 20% improvement in reading from USB devices, however.

So, onto the guts of the testing. It was suggested that the following devices should be included:

Came with all PCs until relatively recently, compared to Apple computers, which did away with them with the advent of the iMac. Iomega Zip discs became the industry-standard external storage medium for Apple hardware and many Power Mac models had an internal Zip drive.

For laptops, a USB floppy drive was a good alternative to integrating a drive and therefore saving space. It was also the only option for PCs and laptops that had no internal FDD option at all.

A device that uses the same physical form factor as a floppy drive, but reads virtual floppy disc images from a USB stick and presents them to the computer as 'real' floppy discs.

The spiritual successor to the floppy drive, it used a 40-pin ATA connector rather than a floppy drive interface so it was faster and it fitted in the same slot. It was also more accurate, as lasers were used to guide the magnetic head. Although it used the same magnetic disk technology used in standard 1.44MB floppy disks, it could fit a higher density of data onto the surface. This meant it was also backwards compatible with standard discs and could also read date more accurately than a standard drive. 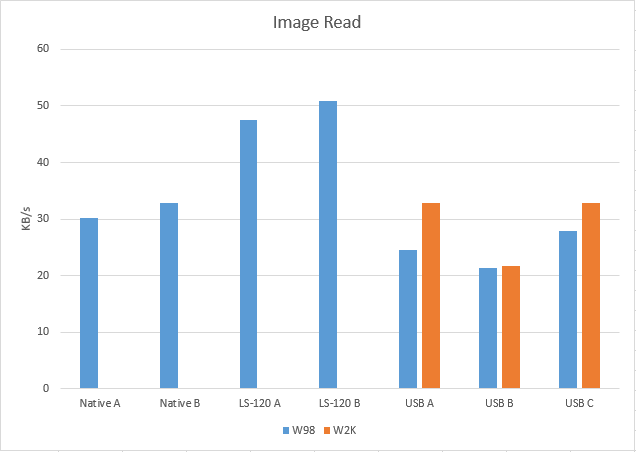 As you can see here, USB drive B was the slowest of the bunch at reading a disk to an image file, barely achieving 20MB/s. This is 33% slower than a built-in drive and more than 50% slower than the fastest result, LS-120 drive B. 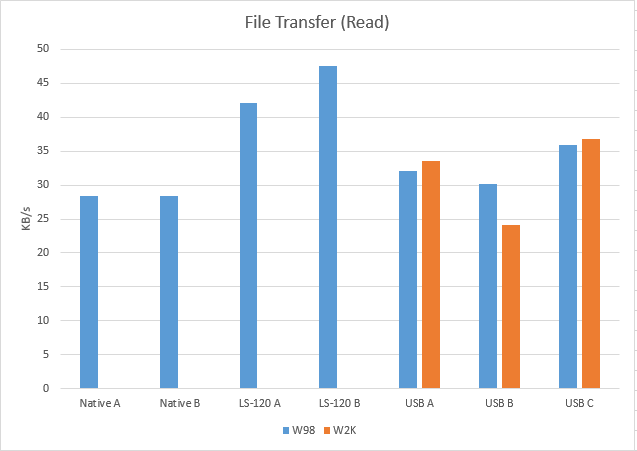 The shape of the graph is mostly consistent for transferring many files, but the USB drives have an advantage here. The slowest drive is around 50% faster in this test, and each of the other USB drives show improved transfer rates. The internal drives are all marginally slower. 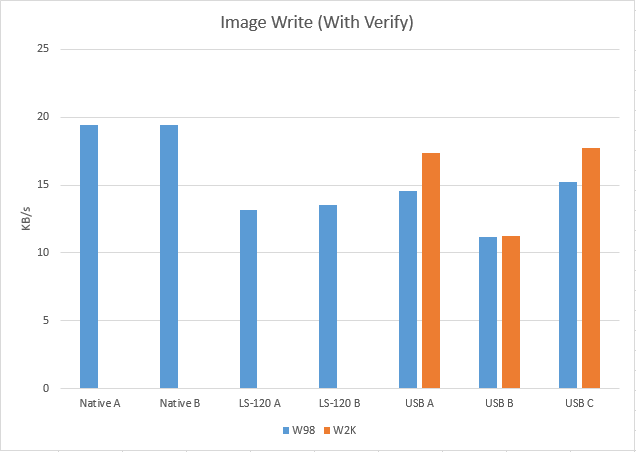 A bit of a switcharound for writing an image file to a disk. Both the internal drives come out on top with identical transfer rates, about 50% slower than their read speeds. USB drive B still languishes in last place with barely over 10MB/s, while the performance of the LS-120s is comparable to the other USB drives. 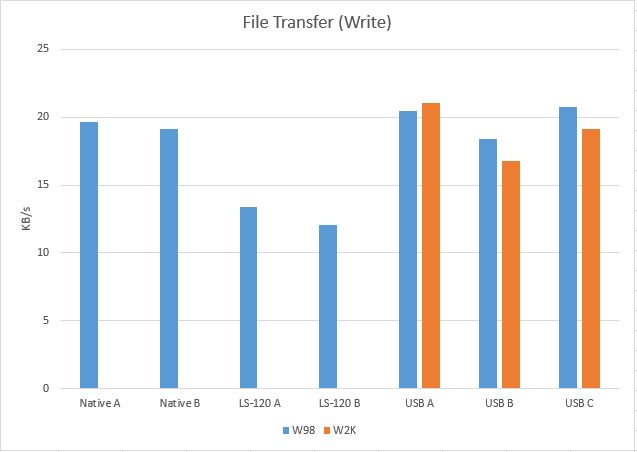 The story is different again with transferring many files, with the LS-120 drives having a terrible showing. The internal drives perform almost identically to the previous tests, and the USB drives actually come out on top.