Home Page
If there's one thing I love about vintage computing, it's being able to play with equipment, platforms or architectures that I never had a chance to see when they were brand new. Every month when I was 13 or 14 I would read about some new technology like the Pentium or 3dfx cards or a Sound Blaster card and wish I had one. Years later, I got to experience all of these things first-hand because their price plummeted when they were superseded by newer technologies. But that's the charm of vintage hardware - going back in time and experiencing that nostalgia from youth - experiencing an old favourite game in a new way. 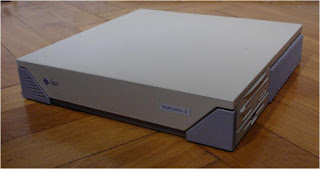 Another example of a technology that I had no chance of experiencing back in the day was Sun hardware. Sun Microsystems started out as a bunch of graduates from Stanford University, who had created a workstation for their network, inspired by the Xerox Alto. That first SUN workstation was a significant piece of history, After Sun was established as a company in 1982 and during their relatively long existence in the industry, Sun had a huge influence on networking, RISC processing, operating systems, and the promotion of open systems as a whole. Their legacy is significant, even if they don't technically exist as a company anymore. So a couple of years ago I saw an advert on Gumtree for a pair of Sun computers and they were FREE. This guy was moving house, didn't want to take the systems with him, and didn't want to throw them away. This was an opportunity I could not pass up. So I drove all the way to Epsom (about 40 miles) to collect a bunch of stuff, the only thing of interest being a Sun SPARCstation 5.

Almost instantly I realised I was completely out of my depth. At first I was getting nothing on screen and, even when I did, it was in a loop and I was unable to stop it. Do you know how many online resources there are for using a Go prompt on a Sun workstation? Almost none! None of my DOS, Mac, Linux or UNIX shell experience could help me here. Sun's firmware is completely proprietary (although I understand it has similarities to some other dev platform). The official manual is available online but it's kinda useless to a noob as it's massively technical. I have subsequently found stuff like the OpenBoot Prom Quick Reference Card, but only because I have now developed the correct vocabulary to be able to search Google effectively. There ain't no such thing as Sun for beginners (although this isn't far off but I literally only just found it).

Anyway, even when I did eventually work out how to boot from the hard drive, I didn't know the root password so, at this point, I had a useless pizza-box in front of me. But I never give up on such things for long. I tend to take these kind of challenges personally so I forged ahead and researched some more.

Part of the problem was that the NVRAM battery was flat. I had read about a similar problem on PCs with the Dallas RTC chip and that you could hack a coin cell onto the chip to get it working again. This is actually one thing about using Sun equipment that is well documented. In particular you have the Sun NVRAM FAQ, an unofficial but very detailed document telling you more than you need to know about fixing common hardware problems with Sun systems. There's a lot to take in and a lot to learn, so much so that I decided to make a Youtube video on how to do the whole process in the hope that someone would find it useful. Once I had done this I was able to install an operating system from scratch (that comes in part 2).