This one's actually a long story. The short version is that, after recently acquiring a dual PIII ready server, I re-housed it. Skip the next paragraph if you don't want the background as to why I did this, but here's the video of me starting it up for the first time:


I originally inherited a Dell PowerEdge 500SC from my job at the time (circa 2003) and was using it as a file server. IIRC it was a PIII 866MHz and, while it was a noisy beast, it worked perfectly for years. At some point around 2005 I migrated it all to an original G4 Apple Mac mini (subsequently replaced by an i5 model in 2011). I think the logic was to do with power consumption and the fact the Mac was on 24/7 anyways as a media player for the TV in my bedroom.

I eventually got sick of OS X not playing nice with Windows clients, plus random shutdowns and lack of internal storage (didn't want to spend money on installing an additional drive). So I set up a new Windows-based system last year specifically for serving files. Looked at what gear I had lying around and settled on an ASUS board (P5GC-MX/1333 - good storage options) with a 2.66Ghz Celeron D (balance between speed an power consumption), 1GB RAM, etc. and an appropriate case (i.e. one with many drive bays). But I was running Windows 2003 Server and, while serving the files worked like a charm, actually using the machine sucked because some of the hardware wasn't recognised by the aged software, etc, etc. Yes, I could have used something like FreeNAS but I wanted Windows Deployment Services for the many XP and Windows 7 builds I do on a regular basis for myself and others, plus many other features such as enterprise-level backup software, etc.

So when I unexpectedly acquired the dual CPU-ready server, I suppressed the desire to simply preserve the system and instead decided it was serendipitously my perfect server solution. This, combined with W2K3 Server, is the perfect blend of software and hardware.

I stripped the components out of the behemoth case and put the case into storage (in case I want to restore the system at a later date). Here are the components that will comprise the new incarnation. These are all parts I already had in use or in storage, except for one item: 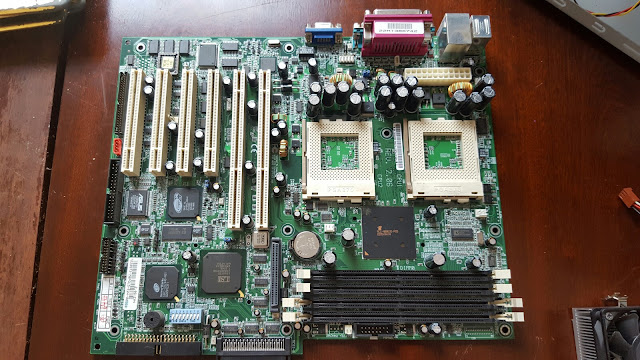 It's a modified ASUS TR-DLS (link to manual), and is missing a few of the headers on the board e.g. the primary IDE channel, a front case fan header, etc. - stuff HP decided they didn't need and got ASUS to omit for the OEM version. It has built-in ATi Rage XL graphics, which will do. The board was pretty clean and the caps look great. 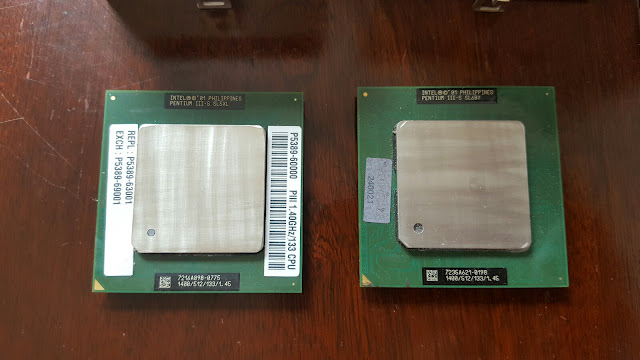 The one on the left came with the board, and the other is one I found on eBay months ago because it was so cheap (less than a tenner). I was advised that I wouldn't be able to used mixed steppings with Windows, but subsequently discovered that, provided the speed and cache matched, and that the older stepping was the bootstrapping CPU, it would work. 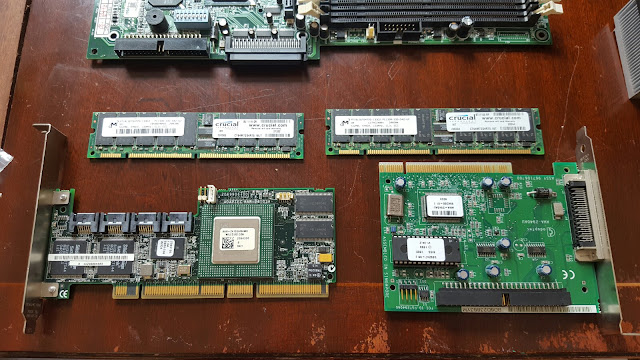 This is the RAM that came with the board, as I have no other ECC parity parts. Lucky it's 1GB - might try and track some more down. Purchased the PCI-X SATA card specifically for this project (the only thing I didn't already have). Just bought whatever I could find on eBay at the time rather than do any in-depth research. It was cheap as they're not hard to come by. IMHO you can't go far wrong with Adaptec where drivers are concerned, certainly. I am yet to measure performance, but I would be interested in doing a comparison between a) SATA b) SCSI with caching controller c) SCSI with built in controller d) EIDE. The second SCSI card was going to interface with the tape drive, but I found a SCSI-2 to SCSI adaptor so I'm using the built-in SCSI. 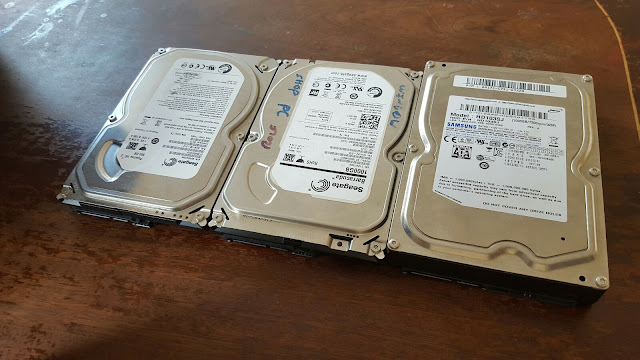 500GB boot drive, 2x 1TB drives to hold all the files. I've been intending to set up RAID 5 for a while now (or RAID 0+1 if I can get 4x drives for the same price as 3) but for now the data is split across two partitions. No way I'm striping. 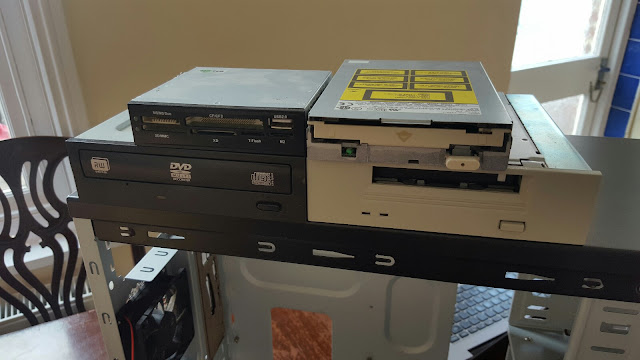 Bezel-less LS-120 taken from an external parallel-port unit (goes with the case, luckily), the DDS3 tape drive that came with the tc3100 (still testing this - might need to be replaced), the optical drive was chosen based on the diversity of formats it supports (required me inventorying all my optical drives first) and memory card reader. This will connect to the single USB header on the motherboard. 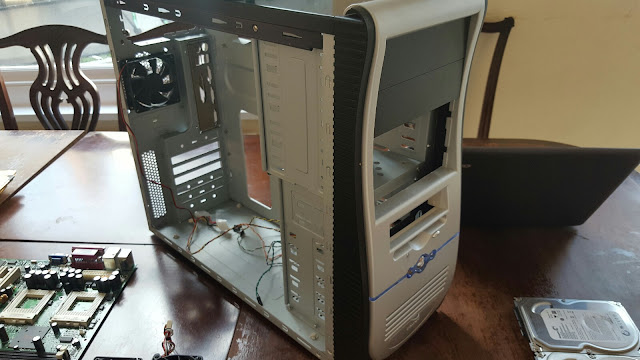 This is the only one I have with 4x drive bays. Actually it has 5, so I can leave space between each drive. I have fitted a silent fan to the front of the case blowing in and the larger of the two at the back, sucking out. I also managed to find two almost-matching heatsinks and then tested all the fans I've got to find the quietest ones. As a result, this machine is near-silent, despite the 4 fans.

The hefty Delta PSU that came with the original machine probably would have done the job, but I went with a newer HIPRO unit instead - more amps on the 12V rail, plus SATA power (not that I don't have enough adaptors for Molex-style). 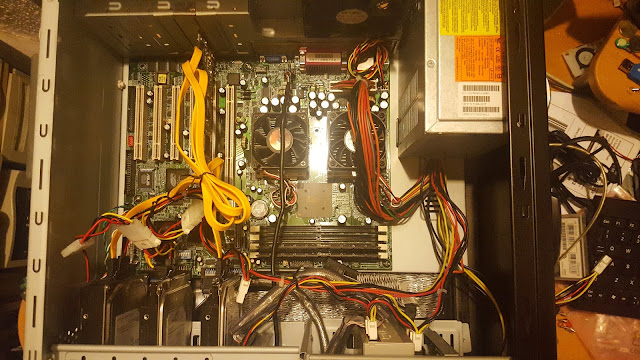 
I need to buy some actual cable ties to finish it off, but the airflow is what's most important. I'm annoyed about the cable for the media card reader going over the CPU fan but it's not obstructing the blades themselves. I need cable ties to hold the ATX power bundle out of the way. 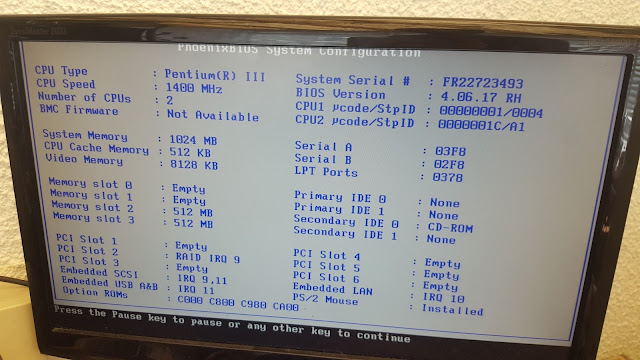 All configured and ready to go. Now to install Windows 2003 Server, maybe do some benchmarks.
Home Page
Posted by Brassic Gamer at 05:34