To begin, this article won't make much sense if you don't know the difference between the Internet (capital I) and the Web (capital W). There are definitions at the bottom of this page but the TL;DR version is that the Internet is the 'hardware' that connects the world's computers together, and the web is the 'software' that runs on it.

I couldn't tell you the first time I heard of the Web, but the first time I accessed it was in 1997. It was at the opening of Simply Computers' new warehouse and store on Blackhorse Road in London. Although I don't remember the exact date, I do remember that Gary Mabbutt (former Tottenham Hotspur team captain) was the 'celebrity' who was invited along to cut the ribbon so for me, as a Spurs fan, this was a bonus. Simply were the first people I bought PC hardware from, specifically a CD-ROM drive and a Sound Blaster AWE32 (and probably some RAM). At the event they had a room tucked away with a bunch of PCs made available for 'surfing the web'. I don't know if you've heard of Web 2.0, but that didn't happen until about 2002 - this was very much Web 1.0.

This article has been made possible by the amazing efforts of archive.org's WayBack Machine, an archive of the Web's history since 1996.


The initial format of the Web largely comprised static pages of information provided by companies, corporations and organisations. Designs were simplistic owing to HTML having not been developed significantly and were characterised by the Times New Roman font, low res images (if any) and tiled backgrounds. Here's what Yahoo looked like in October 1996:

This was well before Google was a thing. Another site frequently used was AltaVista:

Witness one of the oldest irritations known to the web: the banner ad. Oh and buttons usually with bevelled edges for that 3D look. It's just how things were done back then, mostly due to the standard domestic dial-up connection only being capable of 33.6Kb per second. That's kilobits, not kilobytes. Divide by 8 to get the latter. Even the tech giants couldn't make much more of the web than the markup language at their disposal. Check out Apple's 1996 homepage:

In many cases the image files were not archived with the HTML so there are visible gaps. This actually adds to the authenticity of viewing web pages back then, because it would take significantly longer for any image data to download than it would the text. In fact, many people unchecked the 'display images' box in their preferences for speedier loading times. As a result, webmasters tended to be dillgent when it came to filling in the alt text box, which is the text displayed if the image isn't visible. You may wonder why this feature is still used today - for accessible web pages, the alt text is used by text recognition software to read out the captions. Also notice the 'where to buy' link - no e-commerce here.

One of the most remarkable things was the amount of screen real estate these pages used. These images are the actual size of the web page as it is displayed. Most were designed with an 800 x 600 pixel resolution in mind, if not 640 x 480. That's certainly the resolution I was using with Windows 95 until I upgraded my monitor in 1999. It could also be said that 'web sites' weren't really a thing either. These were homepages in the truest sense of the word. Check out id Software's site: 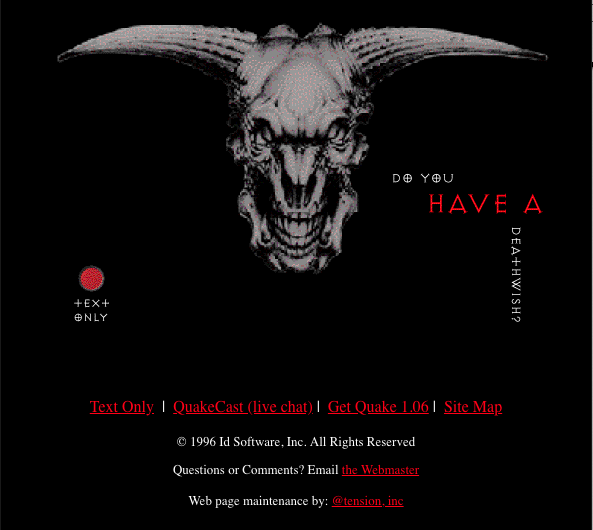 Quite impressive by comparison. I like how much mood they've managed to get in there, despite the limitations of the technology. Note the 'text only' option.

But it wasn't all big business and corporations. There were a small number of hosting services at this time, such as Demon and Cityscape, who provided an enormous 1MB of space for individuals to showcase their own nascent web design skills. Here are some classy examples.


You can check out the full list of sites here and it really is worth spending some time scrolling through and looking at what was on offer. The ones above are actually relatively bearable and informative compared to some. The struggle between content and appearance (and legibility) has been waged for an eternity. The site below is much more like the kind of thing people would produce with their newly-learned html skills: 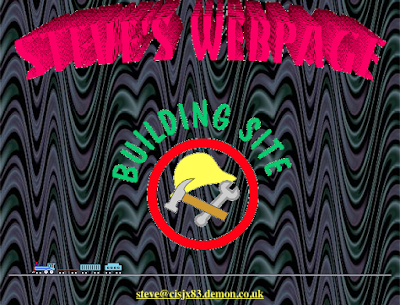 Just because you can doesn't mean you should. Yep, garish was the style of the day, along with obligatory 'under construction' message (made with WordArt, I believe). There were some semi-useful pages though, striking that balance between form and function pretty well:

Game demos were the kind of thing you could only get hold of on magazine coverdisks or, if you were a bit more nerdy and could afford the phone charges, bulletin boards (BBS), so being able to download games from the Web would have been pretty cool back then. Windows 95 combined with an Intel Pentium-based system had caused rapid expansion of the home PC market and you could even get Windows 3.11 connected to the Web. But it was Win95 that got Microsoft in such big trouble in 1998. Although we're accustomed to the notion of web browsers being free to download these days, browser sales were a fundamental part of Netscape's business model so, when MS started bundling Internet Explorer with Windows and making it available as a free download, Netscape collapsed and the US Government took MS to court in a landmark antitrust suit. But I digress.

Notice the multiple download links in the site above. When the Internet itself was still relatively slow, there were geographical considerations when downloading large files. With intercontinental links still developing, it was usually significantly faster to download a file that was located closer to your own country than one on the other side of the world. The longer the distance, the higher the likelihood of dropped packets, which exponentially increased the time it would take to complete a download.

That's all for part one. Part two will look at when I got my own Internet connection for the first time and created my very own website...


The Internet (noun): also called 'the Net', a worldwide network of smaller geographically-limited computer networks. Originally ARPANET, a communications network linking U.S. government facilities and universities / research centres. Established in 1969, it was the first network to use the TCP/IP (packet data) protocol. It differs from the basic model of a WAN in that there are multiple geographical routes to any node on the network rather than one. This betrays the vulnerability of physical network links, and the need to build in redundancy in the case of a failure. Traffic is directed by devices called routers, utilising Dijkstra's algorithm (among others) to calculate the shortest path between a start and a destination, potentially with multiple 'jumps' on the way.

In 1995, I finally ditched the 386 and built my first PC. I searched through magazines for months, researching the best value components and finding the best prices I could. A whole world of games I had never previously been able to play were suddenly at my mercy.

For me, this era was the Golden Age of PC gaming. The things had had been holding the PC back as a legitimate gaming platform (most people had a console or an Amiga for that) were suddenly being addressed apace and, ironically, this was all down to Microsoft Windows. The need for higher bandwidth graphics to adequately run a GUI brought in local bus technology such as VESA Local Bus and PCI. Clock doubling revolutionised CPU speeds and then, in 1993, Intel's Pentium was released. Although out of reach for most home users, developers such as id Software harnessed the additional horsepower to create Quake. Both that and Doom were so revolutionary that I (and others) were willing to play them at a snail's pace on outdated hardware because they were that good. They were also the reason many people upgraded.

Wavetable audio also became standard on desktop soundcards, Windows 95 was released and, in around 1997, 3DFX completely changed the game. Although the name fizzled out in the wake of competition from ATi and nVidia, it kicked off the 3D graphics revolution.

It was also during this time that gaming on Windows really took off, with the development of DirectX and DOS gaming slipped away into the past. It had a good run and produced some of the most iconic gaming titles of all time. Here are the ones I played over and over again, and still play today.

All screenshots originate from Moby Games, and each game is linked in the caption.

Posted by Brassic Gamer at 03:28 No comments: